(Donna’s note: This is a reprint of a column that was published by the Indiana High School Press Association and on http://www.cannonline.org back in 2012 when the Indiana Chamber of Commerce became the journalism equivalent of the Wizard of Oz, granting my request to interview Carl Bernstein and Bob Woodward. What these men told us then about the future of journalism rings even more true today – definitely evergreen.) 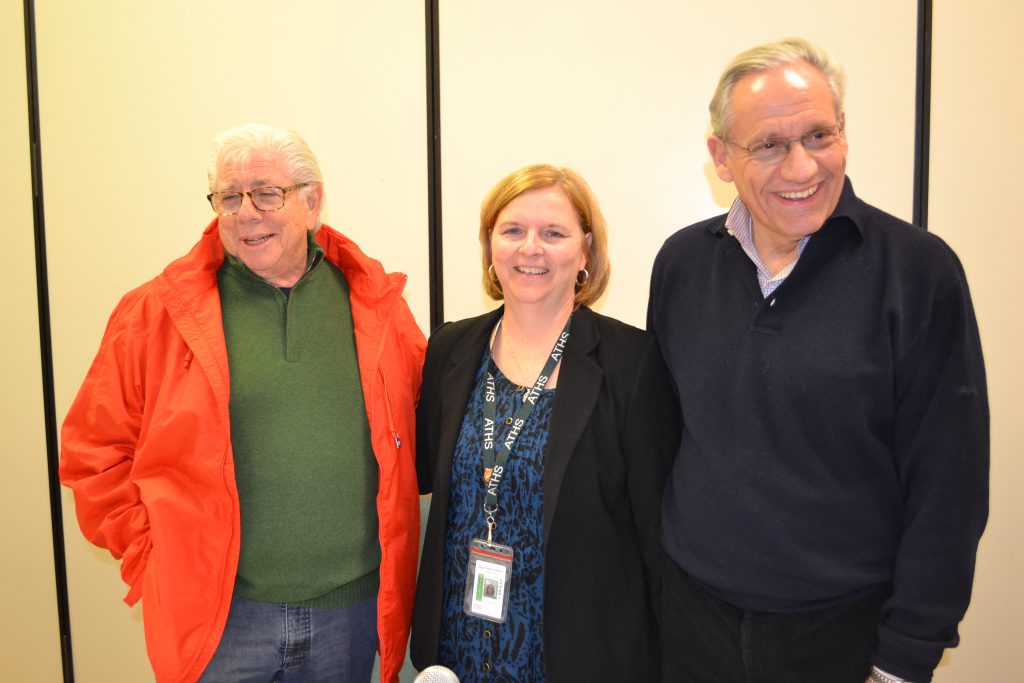 Forty years ago they broke the Watergate story that led to Nixon’s resignation. I was in middle school. I studied them in college and now they are part of the fundamentals of my curriculum in Journalism IA. My class watches “All The President’s Men,” faithfully, albeit, grudgingly each year.

It says a lot about the character of these men that they spent almost an hour Nov. 1 simply “talking shop” with young journalists from the Urban Media Project at Arsenal Technical High School and IUPUI.

But thanks to the Indiana Chamber of Commerce, who granted my request for this special session, what they had to say meant even more.

“As Bob has said many times, all good reporting is done in defiance of management,” Carl Bernstein told the nearly 20 students gathered at the Indiana Convention Center before the two spoke at the Chamber awards dinner later that evening.

Bob Woodward added his own warning.

Less than a week before the 2012 General Election, the two journalists, who have covered administrations ranging from Nixon to Obama, displayed their insight, wisdom and a give-and-take honed over decades of collaboration.

“Readers/viewers are not interested in knowing the truth,” Bernstein said. “They only want information that reconfirms their previously held beliefs; this is the terrible thing about today. It is the overriding reality, being unreceptive to the truth – it’s part of our political culture and the larger culture – it is poisonous; it’s toxic.”

Granted this is a lifetime dream of mine to meet these journalists and it is heartening to know they are exactly as I admired – honorable, ethical and committed to standards and principles of their profession on which this country was founded.

“Because the media is so focused on what’s next, they are going to miss a giant story,” Woodward said. “Right now it is all about manufacturing controversy and name-calling, which is easy to do in the highly politicized partisan atmosphere we have today; it masks the real complex issues.”

And they gave hope, not only to me as a member of the old guard, but also to those who will take the lead in the future.

“Yesterday we had the amazing opportunity to speak with two of the greatest journalists in the world, Carl Bernstein and Bob Woodward.  As a young journalist, it was a once-in-a-lifetime opportunity to hear them talk even if it was less than an hour, and I felt like everything they said was sacred knowledge,” said senior Brandon Real, editor-in-chief of the Arsenal Tech Cannon newspaper. “Normally when we learn about people like them it’s in a textbook, or they’re long dead, but I got to talk to them, and that is a privilege few other journalism students will have.”

And the privilege continues to provide inspiration and faith for the inner city young journalists.

“It wasn’t until I walked in and sat down in the same room as them that I truly began to understand how remarkable Woodward and Bernstein are. I could do little more than admire the sheer amount of courage and hard work that it must have taken these journalistic legends to uncover the truth behind biggest political scandal the nation had ever seen,” said senior Lucy Knorr, online opinion editor.  “As they spoke, I began to realize that their frustrations with the current state of the media were the same as mine. Increasingly, it feels as if the news has become less of a place to find truth and information, opting instead to be yet another biased entertainment source. Meeting Woodward and Bernstein reminded me that at one point great journalists did exist and they broke hugely important stories. Perhaps, with great role models like these, there is hope for my generation to bring the era of great journalism back.”

What about the future of print reporting? One student asked.

“You have to do more stuff indepth – put time against the problem,” Woodward said.

The tools of the reporter have not changed since Woodward and Bernstein broke the Watergate story: Do your homework – research, get information through documents, interviewing and then there is the one aspect the duo said that often gets lost in technology’s virtual shuffle.

“You have to go there. What can you witness? You have to see what it is,” Woodward said. “Get the best obtainable version of the truth.”