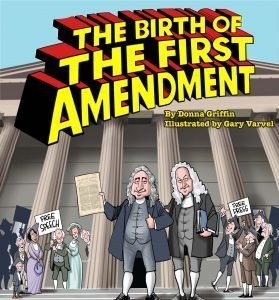 Journalists Donna Griffin and Gary Varvel once again teamed up on groundbreaking graphic novel that will inspire and educate a new generation of informed citizens and support journalism education across the country.

Sponsored by the Hoosier State Press Association Foundation Board, “The Birth of The First Amendment” will launch Nov. 4, 5-7 p.m. at Shortridge High School, paying homage to the school’s seminal role in high school journalism as the nation’s first high school daily newspaper.

Books will be available for purchase and signing, with giveaways and discussions on the relevance of the First Amendment for young people today. Copies are also available at https://birthofthefirstamendment.org/

This 48-page graphic novel, now on sale nationally and internationally, is the first in a series published by Griffin Media + Publishing LLC and distributed by IngramSpark’s network of national and international partners.

Griffin is CEO of Griffin Media and Publishing LLC, publisher of “The Birth of the First Amendment. She is also the author of “The Twelve Days of Christmas in Indiana,” 2014 (Hardcover) 2017 (Board Book), a student media adviser at Shortridge High School in Indianapolis and director of the Urban Media Project, an initiative of her non-profit organization, Dani’s Dreams Innovation in Education Corp.

Varvel is a national award-winning syndicated editorial cartoonist who worked for The Indianapolis Star for 24 years of his 40-year career. He is a member of the Indiana Journalism Hall of Fame and author/illustrator of “The Good Shepherd,” 2014.

“THERE IS A REAL REASON THE FIRST AMENDMENT IS AT THE TOP OF THE BILL OF RIGHTS. . .” said author and publisher Donna Griffin.

“Birth of The First Amendment’ is designed to engage youth with information and tools to think critically, communicate responsibly, and participate as active citizens in our democracy,” Griffin said.

What does BOTFA mean for young people today? Find more information in the special Back Matter section:

“‘Birth of The First Amendment’ is designed to engage youth with information and tools to think critically, communicate responsibly, and participate as active citizens in our democracy,” Griffin said.

We’re looking forward to the call coming up! Submit your question below and we might be able to cover it during the live session.