The First Spark of Freedom 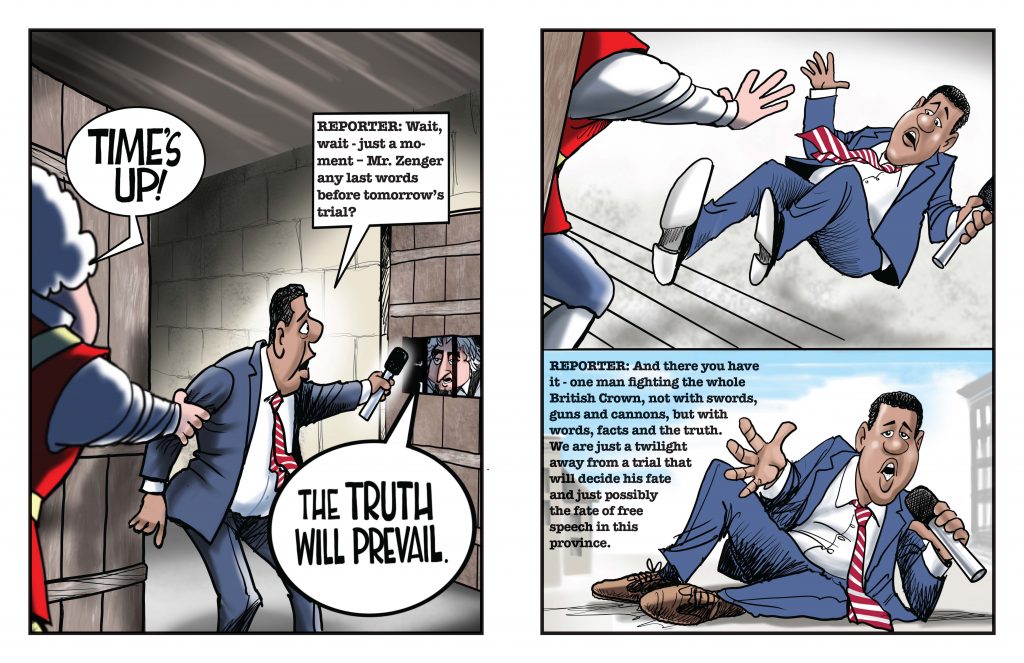 The paperback version of “Birth of the First Amendment” is now available. Get copies today for yourself, your school, & your local newsroom!

Truth. Fake News. The First Amendment. How did it all start?

When John Peter Zenger printed the New York Journal in 1734, he joined a special group of Americans – journalists who were patriots and partners in the battle for freedom for the Colonies. Printers joined forces with lawyers who understood the power of the written word.

In this middle grade graphic novel, Zenger refuses to bow to British authority despite being imprisoned for eight months. He continues to publish his newspaper thanks to his wife, Anna Zenger, who became the first woman printer and publisher in the colonies.

YOU ARE THERE…as our reporter uses the tools of journalism to take you inside the minds and hearts of Zenger, Anna, his lawyer Andrew Hamilton and their nemesis, Gov. Cosby in this factual account of the drama, conflict and impact of this important moment in American history.

What does this mean for young people today? Find more information in the special Back Matter section:

The story of John Peter Zenger’s trial, “The Birth of the First Amendment” is full of drama, suspense and a timely message!

This graphic novel speaks directly to current discussion, especially among young leaders whose voices are resounding throughout this country.

Contact us for special packages and events or grab your paperback copies below.

The paperback version of “Birth of the First Amendment” is now available. Get copies today for yourself, your school, & your local newsroom!